Augmented Reality (AR) and Virtual Reality (VR) are relatively new fields in the IT space. Popularized by the gaming industry, AR and VR are now making their way into other industry verticals. Leading the way is Utah-based Strata, with over 30 years in the software development business; it’s driving the AR and VR industry with its core platforms: Strata AR and Strata VR.

Strata AR is a web based platform that makes it easy for users to create their own augmented reality experiences for marketing and training. The site (strataar.com) lets users upload an image to use as a “marker” to trigger the AR experience, and then upload or select the content that will appear in the augmented space. The end user then downloads the Strata AR app to view the augmented reality experience. For an additional fee Strata offers client branded apps for both iOS and Android.

On the marketing front, a realtor could take a picture of their business card, upload it as marker and then select a 3D model of a home from the Strata library of available models. When a prospective client points their smartphone at the card it appears to come alive with the home model floating on top of the business card.

Strata points out that Strata AR can be used to make many things come to life with AR, including product labels, marketing mailers, newspaper ads, heavy equipment training and much more. “Strata AR makes it easy to produce sophisticated AR experiences for marketing and training. We really believe this will revolutionize access to augmented reality,” says John Wright, CEO of Strata.

The devices will not matter as much as the content, which will be user modifiable, making it a gigantic step forward for the AR and VR industry

Strata VR uses the Oculus Rift and HTC Vive systems— partnering with business intelligence and analytics provider Tableau, Strata developed a retail reality, enabling users to walk into a convenience store and to select the item in the store and then see the real-time analytics. The system can also use Microsoft's HoloLens and other wholly immersive mixed reality systems. Strata also offers a full suite of AR/VR/3D design tools for Mac and Windows like Design 3D, Spaces VR and Sculpt 3D. Its latest offering is Cobalt -- a CAD software that provides on-demand, dimensionally constrained and equation-driven parametrics, which allows for faster and easier design variations than ever before.

Fortune 1000 companies were the early adopters of Strata's platforms. When Nu Skin, a multi-billion dollar personal care products company, wanted to incorporate an AR platform as part of its new facilities tour, it approached Strata. Nu Skin needed an AR platform that would allow users to give themselves a guided-tour of its new facilities. Strata created a system with markers and triggers around ten different spots in Nu Skin's facilities, giving users their own personal guided AR tour around the facilities with their smartphones.

Wright believes that in the future, content will drive the success of AR and VR, created and modified by the consumers, or the clients. The devices will just be tools to view the content, making it a gigantic step forward for the AR and VR industry. One of the highlights of Strata's platforms and apps is that they have social capability built-in, which allows users to record the AR/VR experience and share amongst friends.

AR and VR are limited by processing ability, for this to change; devices will need better graphics and better processing. The further introduction of Near Field Communication (NFC) will allow for any store or museum in the world to be turned into an AR landscape. “Our platforms are all white labeled so that customers can use the same platform with changes to the design concept. Moreover, we foresee an exciting future with Tableau’s partnership; with the launch of Tableau's new restful architecture API, which opens up new possibilities for using analytics in AR and VR platforms,” concludes Wright. 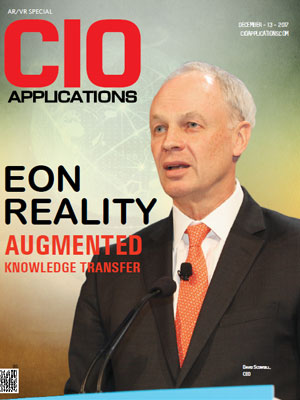