Quant Network: Pioneering The Blockchain OS of the Future

Gilbert Verdian, CEO & Founder
In 2018, Quant Network—an innovative, global blockchain start-up was incorporated in the Global Legal Blockchain Consortium(GLBC), an international initiative composed of more than 225 organisations, law firms, software companies and universities focused on developing standards and compliance guidelines for blockchain and smart technologies. Since then, the Quant Network team have established themselves at the forefront of developing advanced security, privacy, productivity and interoperability of blockchain technologies. Furthermore, the CEO and founder— Gilbert Verdian was credited for establishing the global ISO standard TC307 in 2015. The ISO Standard TC307 has brought together 47 countries to promote the harmonisation of this technology and its adoption. “The company have spent over twenty years protecting people, governments and regulated industries from the risk of cyber security threats, operational failures and malicious actors. We are excited to be able to bring those invaluable insights to the GLBC and help shape this rapidly changing landscape,” explained Gilbert Verdian.

Blockchain aims to be very efficient in streamlining a number of processes in various industries and organizations. Its rapid rise and evolution over the past few years have been consistent, and the ground-breaking technology continues to hold much promise and still has a lot to offer. A key factor responsible for growth is the demand for secure transactions and track record keeping. While many lament the entry of regulators in 2018, implementing strict frameworks and policies for standard compliance—clamping down on ICO projects, these are signs of a market maturing. The current blockchain ecosystem is too complex and fragmented with progress being achieved in silos. The variation of blockchain designs and configurations represent a hindrance for enterprises, software developers and architects. In addition, the lack of interoperability with pre-existing legacy systems, between blockchains and the problem of single-chain Dapps are the major pain points for the uniform adoption of the current blockchain system.

Quant Network’s primary offering is Overledger—touted as “the blockchain operating system (OS) of the future”. Overledger is a patent-pending blockchain operating system aims to solve the problems of single-ledger dependency by increasing communicability among different distributed ledger technologies (DLT) frameworks as well as between DLT and existing networks and enterprise systems. The easy to use agnostic platform provides a meta-gateway for networks to connect to blockchains and vice-versa without being limited to a single technology or method.

The company have spent over twenty years protecting people, governments and regulated industries from the risk of cyber security threats, operational failures and malicious actors

This includes recognition of transactions related to changes of ownership for off and on-chain assets and obligations/rights, arising from smart contracts, across different blockchains.

The integration of blockchain system with legacy or other DLTs is challenging and difficult to implement. In order to address the problem of blockchain interoperability, software references should be set up. However, the majority of existing technologies connected to DLTs define a standard of interoperability within their platform, but not externally. This makes it difficult to choose the appropriate DLT fit for a purpose, meeting technical and business requirements when considering DLTs for decentralised applications. Furthermore, the technical dependency slows down mass-adoption, limits scope, impedes scalability of new features and reduces necessary controls required for data security and privacy. From a business perspective, a single-ledger DLT application increases the amount of risk, complexity and effort needed to adopt multiple DLT technologies. Enterprises are forced to accept financial risk due to a monopolistic approach to DLT fees, by limiting options to manage fees and transaction costs. The Overledger abstracts single-ledger dependent technology to overcome the bound of different architectures regardless of addresses, ledger implementation and consensus mechanisms. Rather than defining a specific platform with multiple connectors, accommodating the plugin of compliant DLTs, the company’s solution introduces a vendor-independent wire-level protocol for message-oriented middleware.

The Overledger provides a unique solution to interoperability for digital ledger environments by decoupling and redistributing tasks among four different layers in the blockchain architecture—transaction layer, shared messaging layer, filtering and ordering layer and application layer. This enables developers to build multi-chain applications that seamlessly run the same business logic across different blockchain networks and protocols. The firm’s blockchain architecture follows similar principles that inspired the OSI and TCP/IP models for communication networks. The multi-chain strategy enables organizations to scale-up and improves their systems with future technologies without having to pay excessive costs for installing multiple blockchains. The transaction layer stores all transactions appended on the ledger’s technology—including all operations needed to reach the consensus in different blockchains. At the same time, the messaging layer contains all relevant information retrieved from the ledgers such as transaction data, smart contracts or metadata.

The filtering and ordering layer is responsible for creating connections among different messages built in the messaging layer. While, application Layer designs the rules according to customer business logic that will specify which information will need to be extracted from the transactions, and in which order they’ll need to be sorted out.

Quant Network’s industry experienced team focuses on being able to construct useful networks without significant overhauls to Blockchain infrastructure and aims to empower enterprises to secure their blockchain investments, allowing them to focus on its core objectives. To enhance user privacy, the firm has conceived the introduction of a multi-part message hash pointer technique. By doing so, the application layer provides each user with particular parts of the messages and hides the level of secrecy. Thus, only the specific user will only be able to see a hash pointer or a random sequence of data. In order to democratise the development of blockchain applications, Quant Networks have developed a Blockchain Programming Interface (BPI) and Overledger Software Development Kit (SDK)—a set of software development tools that enables developers an easy and standardised solution to access the Overledger functionality. BPI and SDK provide the opportunity to interface with lower level functions of ledgers without the need for detailed knowledge of Op-codes or scripting methods.

By the end of the current year, Quant Network plans to launch the “Quant App Store” to provide developers with the opportunity to create and publish Mapps. The firm will provide users with the options to choose the best business model for their MApp in-line with market standards. Users can either charge a one-time fee per transaction or a subscription model for monthly recurring revenue. In addition, Quant Network also aims to produce their very-own sector-specific Saas, enterprise and middleware applications with a focus on financial services, healthcare, supply chain and government industries. The Saas offerings will include Op Code Plugins, Legacy Data Interfaces, AI-driven fraud detection and pattern recognition and more.

From providing payment access to reducing cases of fraud and cyber-attacks in the financial landscape—the potential uses of blockchain technologies are seemingly endless. Blockchain will help make data more secure with the help of algorithms even in an encrypted state as well as help track, understand, and audit AI decisions better and thus, lend robots the level of transparency required for the public to trust such machine-driven intelligence. Verdian anticipated the scope of change blockchain was going to bring, stating “I saw a potential similar to that of the internet in the early 90s. We’re at the cusp of something big, blockchain can change a lot of how the internet operates and a lot of how processes operate, and we just don’t know what we can do yet”. 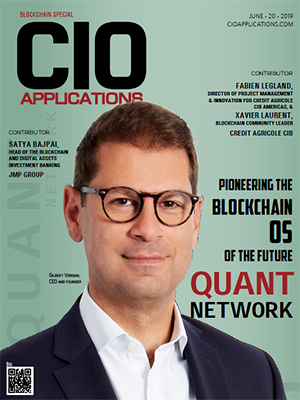