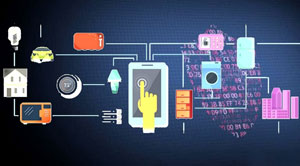 As consumers are increasingly using smart devices at home, several interconnected devices are creating new security issues. The problem is created by companies expanding radically the number of sensors and remote monitors used to manage overhead lights in corporate offices and detailed factory manufacturing processes. Cities, in particular, are desperate to use new technologies to improve energy efficiency, improve the quality of water, and reduce traffic congestion.

The IoT devices are rising to billions in number. They create an interconnected world with the potential to make life more enjoyable, productive, safe, and efficient for humans. But many of those devices have no real security; also becoming part of botnets, vast networks of small computers are vulnerable to hacker hijacking.

Botnets have created various internet problems, from sending large amounts of spam mail to disrupting websites across the globe. However, most botnets typically consist of laptop and desktop computers, and the unsecured device growth such as industrial sensors, televisions, webcams, and other smart home devices is leading to increasing disruptive capability.

Even though IoT is progressing rapidly, in the years to come its progress is forecasted to be slow. The main reason for this is due to the lack of standardization in the handling of unstructured data and the lack of technical skills to use top-tier instruments. If high-end enterprises do not set standards, these challenges will be harder. Owing to trust, security, and privacy, the presence of different communication networks among numerous devices will result in certain limitations. It must be determined at the IoT communication network design stage.

The IoT includes various types of devices made by a wide range of companies–webcams, pressure sensors, thermometers, microphones, speakers, and stuffed animals. A lot of these manufacturers are small and unknown and are not protected by popular brands or public reputations. They aim to produce as many devices as possible to sell at the least cost as possible.

The IoT devices are capable of doing many things, but at the same time, they are exposed to a wide range of vulnerabilities such as unencrypted communications, weak passwords, and insecure web interfaces. These millions of insecure devices across the world pose the way for hacking. Several ISPs are moving toward distributed architecture to avoid data theft, driving the endpoint security solutions market.