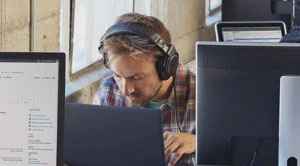 Satya Nadella, CEO of Microsoft, is found to be very fond of three technologies among which quantum computing is one, and other two are artificial intelligence and mixed reality. Quantum computers are completely different from the current traditional systems, as they are capable of solving a complex problem which traditional machines cannot. A supercomputer is not capable of decoding security codes of military and business machines, but a quantum computer can do this in minutes. Quantum computing is said to lead the next wave of digital revolution.

The researchers at Microsoft are now busy building a scalable computer that aids humanity in unlocking the solutions in the major areas such as global warming, clean energy, and material design among others. If all goes smooth, Microsoft would have developed a super machine within the next five years.

Quantum computers use qubits (a structural and functional unit) instead of the legacy bits. These qubits are not just limited to binary and can have both 0 and 1 simultaneously. This makes the computer to try a maximum possible sequence of numbers that can crack or unlock vast or huge amounts of data. Microsoft is looking ahead on a five-year time frame to build a quantum computer, and what it needs are 100-200 qubits with low error rate. Global effort for quantum research is necessary for finding better qubits. Microsoft has also partnered with various stakeholders like universities and governments to make its dream come true.

Not only is Microsoft aiming at building quantum computers, but also several other tech bodies like IBM, Google, and Intel have joined to build a scalable quantum computer. Bristlecone, a quantum computing chip comprising of 72 qubits, unveiled by Google and IBM announced 50qubit processor last year. Quantum computing has massive implications for research and development in healthcare, energy, environmental systems, and smart materials. Quantum systems can integrate seamlessly with highly secured Azure cloud.

Microsoft first started creating raw materials necessary for making topological quantum devices to build a scalable quantum computer. In fact, Microsoft is only the company that attempted to create topological qubit devices. At present, the company runs many labs around the globe that is specialized in the fabrication of quantum devices. The infrastructure enables efficient mounting, writing, and cooling of the devices which supports rapid prototyping and exploration. Microsoft is on the cusp of empowering quantum revolution through topological approach. Quantum computing might become more intelligent with the integration of AI.