Gary Gysin, President & CEO
Ever since the emergence of technology, humans have invaded the planet and its surroundings in every possible way. “We are well aware of space, our planet’s landmass, and many other things, but sparsely do we know about our very own blue neighborhood, the ocean,” says Gary Gysin, President and CEO, Liquid Robotics. The oceans approximately cover 71 percent of the earth's surface and 90 percent of the earth's biosphere but it still remains unnoticed in several aspects. The California-based Liquid Robotics is devoted to reform this with its wave propelled and solar-powered robots that can swim in the ocean for years. Equipped with sophisticated sensors and networking equipment, these robots collect critical ocean data. This includes everything from water temperature to geophysical data, marine animals to illegal surface ships and hostile submarines. The robots then communicate with remote command centers to provide real-time analytics to corporations and governments worldwide.

"We are on our mission to digitize the ocean enabling economic prosperity, increase security, and to ensure sustainability of our planet"

Liquid Robotics' fleet of unmanned autonomous ocean robots, called Wave Gliders use the ocean's endless supply of wave energy for propulsion. Inspired by the Humpback Whales—one of the most agile creatures in the ocean—the Wave Glider consists of three parts. These are—the float that moves on the surface of the ocean with waves, the umbilical that connects the float, and the submerged wave engine that transfers this motion into forward propulsion. The winged robots come alive as soon as they are dropped into the ocean.

The ‘float’ moves forward and the wings begin their continuous back and forth articulation once they dive into the ocean. The wing rack below the surface provides tremendous torque (up to 2000 lb), allowing towing of up to one ton of mass behind the Wave Glider.

Any device from an iPad to a laptop to a smartphone can be used as a command center to not only direct the fleet of these ocean robots but also to get information delivered to the devices being used by the defense operations commander, oil & gas operator, researcher, or scientist. 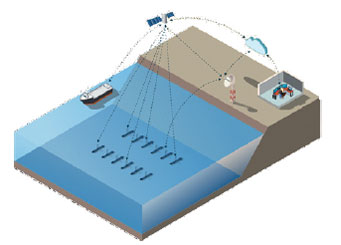 “Just designing the robots to swim for a year and transmit data is not enough—they also need to overcome the extremes of the ocean,” says Gysin. Wave Gliders have faced over 17 hurricanes, typhoons with sixty-five-foot waves and winds that blow at 150 knots and yet keep working,” he adds. In November 2011, Liquid Robotics put Wave Gliders to the test. Four Wave Gliders set out from San Francisco Bay to begin a two-fold mission: one, gather data about the oceans and provide the data for free to the world’s explorers and two, an endurance test to be the first unmanned ocean robot to cross the World’s largest ocean, the Pacific. The vessels were launched in pairs, with one set headed for Australia and the other to Japan. Even after facing Typhoon Freda, a category 4 typhoon on the east coast of Australia, the Wave Glider kept transmitting data, the first of these unmanned gliders, reached the land of Oz—on the way setting the Guinness World Record for the "longest distance travelled by an autonomous unmanned surface vehicle”—over 14,000 kilometres in just over one year.


“Now we don’t have to tell the world what we are—the world record and the way Wave Gliders conquered the Pacific, speaks for us. Such an ability brings forth many advantages,” states Gysin. For instance, with many island disputes and maritime issues, Indonesia—which has 75 percent of its territory ocean-based with 7,000 islands and thousands of fishing villages—entirely depends on the ocean for their livelihood. The country faces a huge problem patrolling and monitoring illegal fishing in their jurisdiction. The Indonesian ministry sought Liquid Robotics to address these issues. The Wave Gliders, sailing the coasts of Indonesian waters formed a well-established network that provided knowledge and the intelligence about the vessels that might be doing illegal fishing.

Wave Gliders leverage satellites, mobile phone networks, Wi-Fi, and other communication channels to build a seamless communication network while they are in the oceans. The seafloor to networked space environment helps the Liquid Robotics team to explore and understand the oceans fully. These unmanned swimming robots build the grid that can cover the vast expanse of the ocean and help establish a seamless network of communication and data. This advantage helps solve critical problems for the defense, oil and gas, commercial, and maritime and environmental professionals.

Over the past few months, Liquid Robotics has partnered with two global leaders in order to protect and sustainably manage the marine sanctuaries and ecosystems. In alliance with the Australian Institute of Marine Science (AIMS) and NOAA’s Office of National Marine Sanctuaries, Wave Gliders are helping scientists gain new insights into the true health and conditions of their vulnerable marine sanctuaries.

“We want to connect a substantial number of sensors, manned and unmanned systems, and satellites to the ocean network making it a place where data can be accessed 24/7. We are on our mission to digitize the ocean enabling economic prosperity, increase security, and to ensure sustainability of our planet," concludes Gysin. 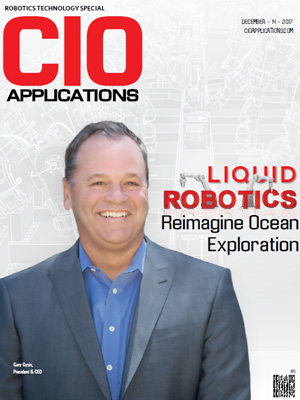