Construction Productivity has been Stuck for Decades

In addition to productivity, one of the biggest issues currently facing the construction industry today is a worker shortage.

The worker shortage in the US construction industry is an acute problem. A common term used within the industry right now is, “The War for Talent.” Between April 2006 and January 2011, the construction industry eliminated more than 40 percent of its work force, cutting nearly 2.3 million jobs. Many of these workers have not returned for a variety of reasons. In addition, studies show that five workers are retiring from construction for every new one that enters.

People are responsible for nearly all the value created on construction projects, unlike manufacturing where automation is increasingly the norm. Without construction workers, there is practically no value added in construction. To make matters worse, like the overall industry, the productivity of construction workers is abysmal even by the most conservative metrics. Detailed time studies conducted by the authors of this report reveal that construction workers on the ground spend about 20 percent of their time performing activities that add value. A majority of the time is spent waiting or doing “set-up” type of activities. It would be incorrect to interpret the poor productivity as a judgment on the construction workforce. As the great management philosopher W. Edwards Deming said, productivity is 94 percent a systems problem and 6 percent a people problem.

Role of Technology in Construction

In construction, the system is where technology breakthroughs will happen. Deming also stated, “Management’s job is to know which systems are stable and which are not.” With the current technology commonly used within the industry, this is nearly impossible. For example, a common practice in the industry is called a Request For Information (RFI). RFI’s are typically written into construction contracts with expected resolution times.

It is common for that total time to be five days. Imagine, needing an answer and having to wait a full work week to get a response as common practice. In reality, the turnaround time can be double the contracted duration. The reason for the disparity is because a construction worker in the field identifies a question and needs to obtain the answer. The contracted duration is measured from when the responsible party receives the request and transmits a response, not when the worker receives it. These processes can be facilitated through scanned files and email or technology that allows users to administer the RFI through scanned files and email.

Very few construction workers on a job site have access to technology or current information on the status of the project they are working on. When surveyed about how workers receive feedback on the overall status of the project, the most popular answer is, “how much my manager yells at me”. The second most popular response is, “we don’t”. Getting information to the worker and back from the worker represents the single biggest technology opportunity within the industry. Not only will it provide better information to management so that they understand whether the system is stable or not, it will also attack the time wasted on waiting for information, which currently plagues the industry.

With such a big opportunity available as well as existing technology frameworks that have been applied in other industries, the question becomes why isn’t this fixed? 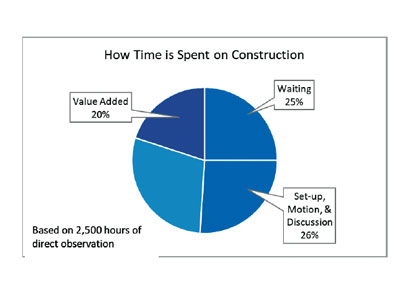 One reason is the uniqueness and fragmentation of the industry. Every construction project is different. Every budget and schedule is different. Each owner has unique business objectives. Every builder and contractor has different business models and strategies. In addition, different owner requirements can get in the way of construction companies making large IT investments. The biggest issue preventing a technology led revolution in construction productivity is a lack of data standards. Even when technology is applied on construction projects today, a vast majority of the data transferred is still in the form of individual and unique attachments, usually .pdf but also .doc and .xls.

Another reason this hasn’t been solved is the size of the construction supply chain. A $400M construction project will routinely have 4,000 different suppliers. Coupling a lack of standardization with the size and diversity of the supply chain manifests ad hoc systems. Without a way to share data in a common platform, we should expect the same performance, or lack thereof, and the inefficiencies obtained with non-integrating platforms.

The solution to this problem lies in standardizing data and how it is transferred. Until this happens, information will continue to be passed in “technology” platforms via attachments and project teams will focus their time on ad hoc data integration rather than maximizing value added activities.

Several shifts are underway to improve this. The Construction Industry Institute (CII) has started an effort that it is branding as “Operating System 2.0” with the goal of developing a universal data standard that should allow integration of many of today’s standalone technology solutions. Several other organizations are also driving data standardization such as the Data Exchange Within the Process Industry (DEXPI.org) and the BIM Service Interface Exchange (BIMSie) championed by the Building Smart Alliance. There is an ISO standard for Building Information Modeling data (ISO 15926). Several leading construction technology companies are pushing their own standardization initiatives. While this may seem trivial, there has been a huge increase in the ability to exchange data across different CAD platforms in the last five years.